The national news story of the Delaware State University Women’s Lacrosse bus’ improper encounter with the Liberty County Sheriff’s deputies was not lost on any of the speakers at both the May 12 Graduate Commencement and the May 14 Undergraduate Commencement ceremonies.

On their way back to Delaware after a southern three-game road trip, the Women’s Lacrosse team bus was pulled over by the Liberty County deputies and without probable cause those officers pulled their luggage out of the baggage compartment and did a rummaging search through their personal items. Claiming be search for drugs. The deputies – who had also used a drug-sniffing K-9 dog in the search – found nothing illegal.

Below are speakers’ perspectives on the unjustified stop and search:

Our Women’s Lacrosse team on a roadway in Georgia, far from campus, tired from a game, ready to be home again, were stopped by Liberty County Sheriff Department deputies. They were accused of drug possession and searched for no good reason.

They exhibited wherewithal, patience, equanimity, and calm in the face of irrational, ill formed and ignominious prejudice. They responded rather than reacted. But now, not just their families, not just this University, but the entire nation is behind them. You all should be quite proud of their discernment and their swiftness to recognize the moment for what it was.

And if you had the opportunity to see the news report, and more importantly the interviews with Coach Pam Jenkins and some of our Lacrosse student-athletes, all I can tell you is that battle is not over, and they will not stop until victory is won.

I am a huge Lacrosse fan. My son plays for the University of Maryland.

I changed me speech this morning after seeing the video of your (Women’s) Lacrosse Team in their blatant exposure to racism. It hit on so,many different levels. It hit me like a mother, it hit me like a parent. It hit us all like people of color. You deserved better, and those officers deserve to be held accountable.

And as for the police officers who dared to breach the sanctity of that team bus, they will never understand it, but it’s our job to constantly remind them. 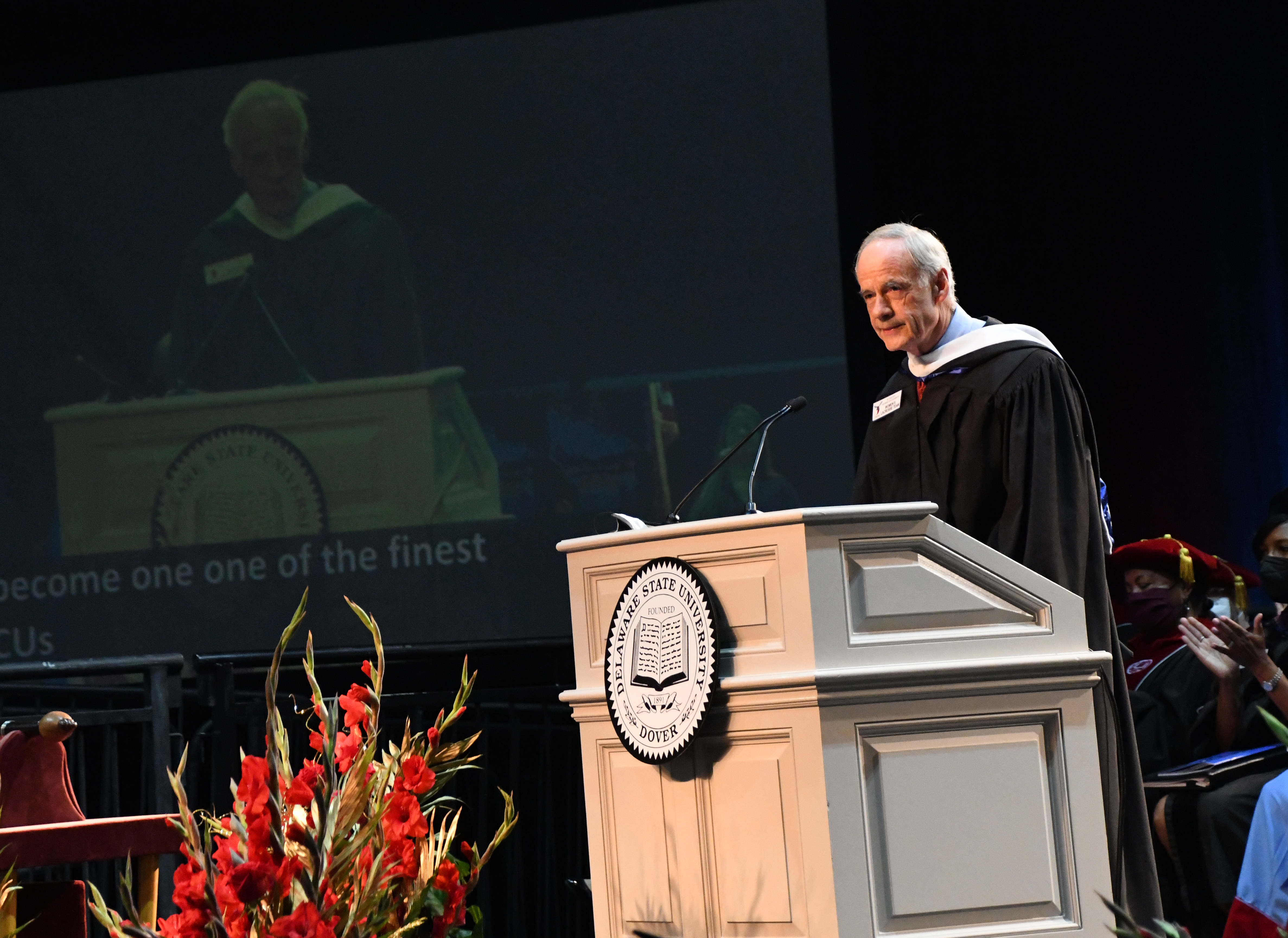 A lot has been said about the Lacrosse Team of this University. Albert Einstein used to say, “In adversity lies opportunity.” (It was) a terrible way to treat anyone, It was a terrible violation of the golden rule. But, across the country, people are reading about Delaware State University, and they are thinking” God, those woman must be strong, they must be brave.” I just want you to know, your governor, you legislators, and your Congressional Delegation, we all have your back.

Ms. Bottoms said the University Women’s Lacrosse Team made her think of the Freedom Riders of the Civil Rights Movement in the 1960s

“Some may find it a stretch, and others may even find it insulting to compare the Women’s Lacrosse Team to the Freedom Riders of over 60 years ago. But I dare say that each generation has its own cross to bear, and if you (graduating class) do your part, the battles fought by the next generation, and the one after that, and the one after that, will not be as difficult to overcome as the battles we endure today. Although the bloody battles of ending blatant discrimination have been fought and won by soldiers who have gone before us. That encounter on that highway in Liberty County, Georgia, reminded us all the quiet, sometimes subtle war for equality, decency and respect still rages on, even in 2022. 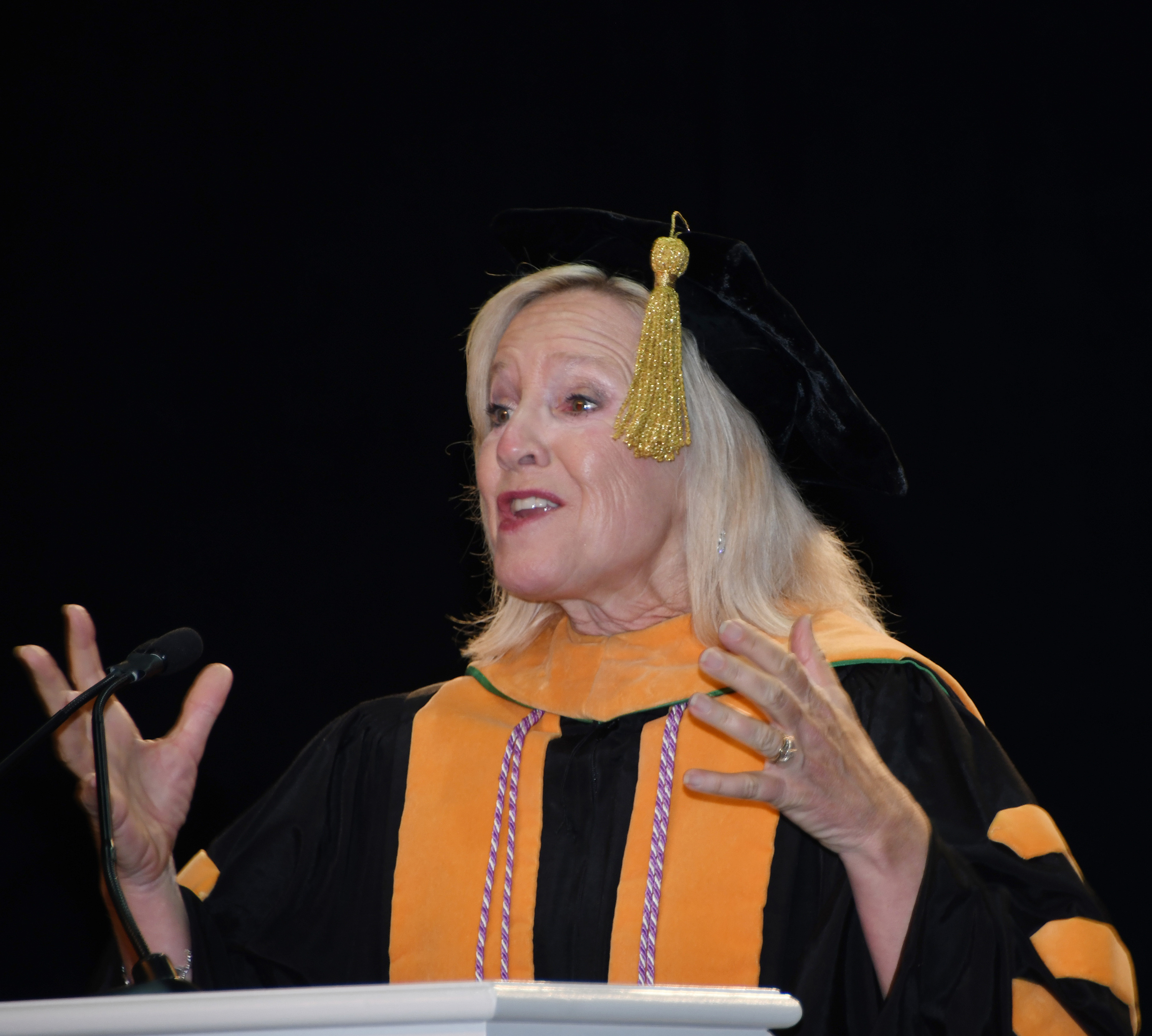 The experience of the Delaware State University Women’s Lacrosse Team has shown us that the most important battle, those that are often life-altering, those battles that define us, are often not the battle we choose, but the one that is chosen for us.

As a mom of a student-athlete at an HBCU, when I saw that, my heart sunk. It was appalling and upsetting. I am pleased that our Attorney General has asked for a full investigation.