Home > News > The career path initiative of a 4.0 graduate
On Campus

The career path initiative of a 4.0 graduate

The fact that Brandi Nichols is among the nine 4.0-GPA graduates at Delaware State University who will each receive the Presidential Academic Excellence Award is remarkable enough.

However, even more impressive while maintaining academic perfection was the tenacious initiative Ms. Nicole exercised throughout her undergraduate years to figure out her career path.

Ms. Nichols – a native of Elkton, Md., but raised mostly in Delaware in Newark and then Magnolia – will walk the May 14 Commencement stage to receive both her award and a BA in New Media in Arts.

She began her undergraduate journey, however, in fall 2018 as an Art Education major while pursuing a minor in Spanish. However, further contemplation about her career path led her to change both her major and minor.

“I saw that New Media in Arts – art and technology – opens up a lot more career opportunities,” Ms. Nichols said. “So I switched my major to New Media in Arts and pursued a minor in Computer and Information Technology.” 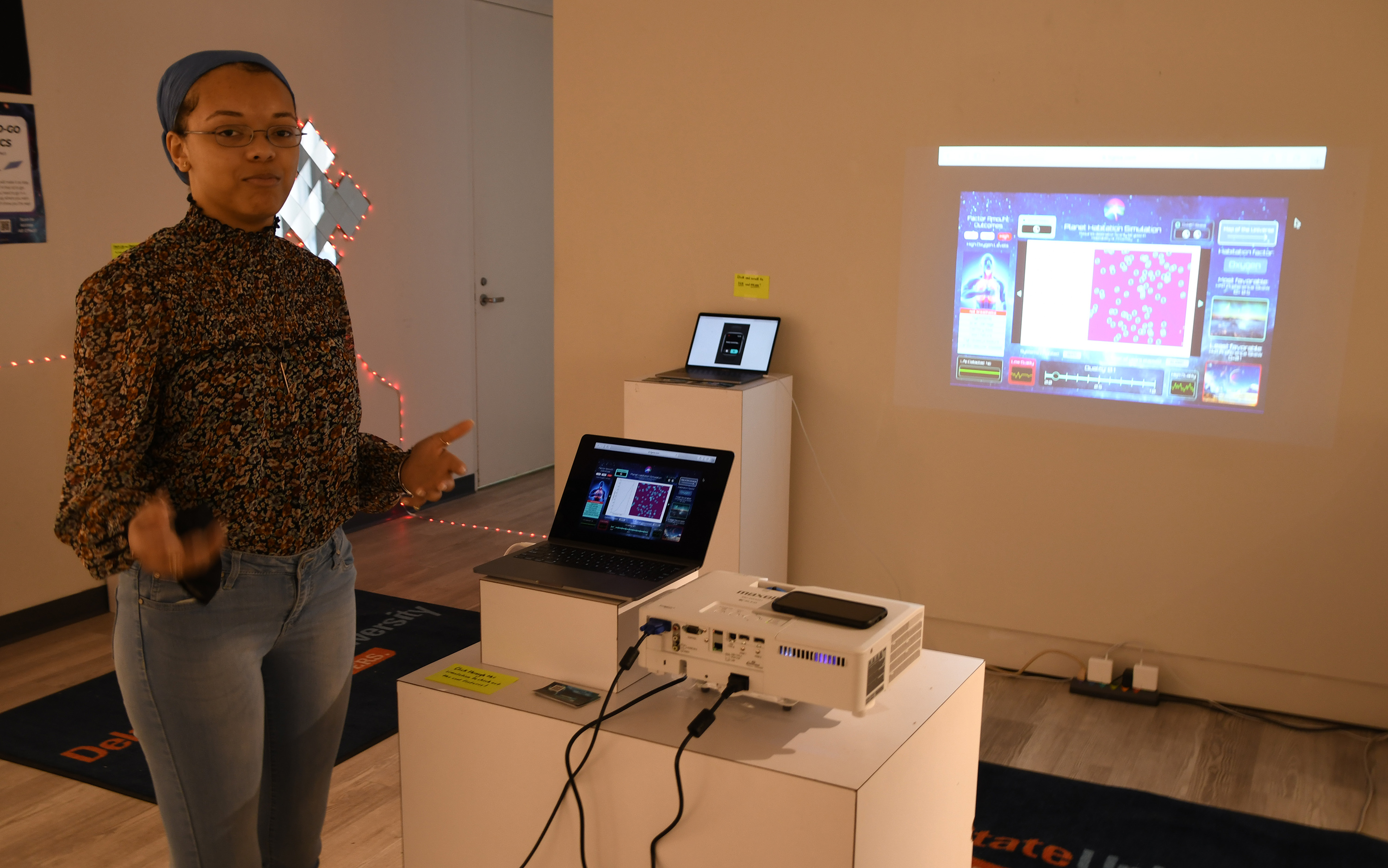 The COVID pandemic gave her additional opportunity to rethink and refine her career direction. Just prior to the Coronavirus, Ms. Nichols was thinking of becoming a graphic designer and approached a magazine about an internship in that area.

In February 2020, Ms. Nichols took part in an event that would prove to be pivotal in her career direction. She joined a team and competed in the DSU Code Swarm Hackathon – an annual University Computer Science Club competition in which teams create code for a new software or service.

In addition to giving her an opportunity to learn more about coding and be a part of the second place team, the competition introduced Ms. Nichols to the digital specialty areas of UX and UI.

For the digitally uninitiated (most of us), UX focuses on all the aspects of the interaction experience between a customer (or, potential one) with a product and its company. UI is concerned with interaction with the user and the digital devise or product – such as the elements on the touchscreen of your phone.

As Ms. Nichols continued increasing her knowledge of such esoteric digital areas, she took advantage of the COVID environments by doing some graphic design internships online.

In the fall of 2020, Ms. Nichols landed a virtual UX/UI apprenticeship with the Office of Natural Resources in the U.S. Department of the Interior. “It was a good experience because it taught me a lot of things, especially in the area of research, which is a crucial part of UX/UI,” she said.

The daughter of Antwain and Bronta Nichols also made one final academic adjustment in the midst of her internship experience – she decided to change her minor to entrepreneurship.

“For a long time, I wanted to start my own business, like my Dad who is a business owner (trucking),” Ms. Nichols said. “He has control over his time, and that inspired me to become a business owner.

As far as her 4.0 GPA is concerned. Ms. Nichols said that after ending her Caesar Rodney High School years with a 3.8 GPA, she made a 4.0 a steadfast goal at the beginning of her freshman year.

Ms. Nichols apparently made a good impression during her internship with IBM, as it has already hired her. After her graduation, she will move to Austin, Texas, to work for the company as a UX visual designer.

Her advice for current undergraduates and future college students:

“Don’t think the classroom is going to teach you everything you need to know. Go out there and do internships and competitions outside of the classroom, the earlier the better,” she said. “Then you can build up your reputation, a background, a brand for yourself. So, when you graduate, it will be easier to market yourself. Everyone is graduating with an undergraduate degree, so you need to be able to differentiate yourself from others.”

In addition to Ms. Nichols, the following 4.0 graduates will also receive the Presidential Academic Excellence Award during the University’s May 14 Commencement Ceremony:

Federal complaint to be filed in Lacrosse Bus incident in Georgia