Join us for the 11th Annual Brass Day. Bring your instruments!
Clinics and ensembles open to all players.

Please pre-register below to play in a participant ensemble or take part in the chamber music masterclass. 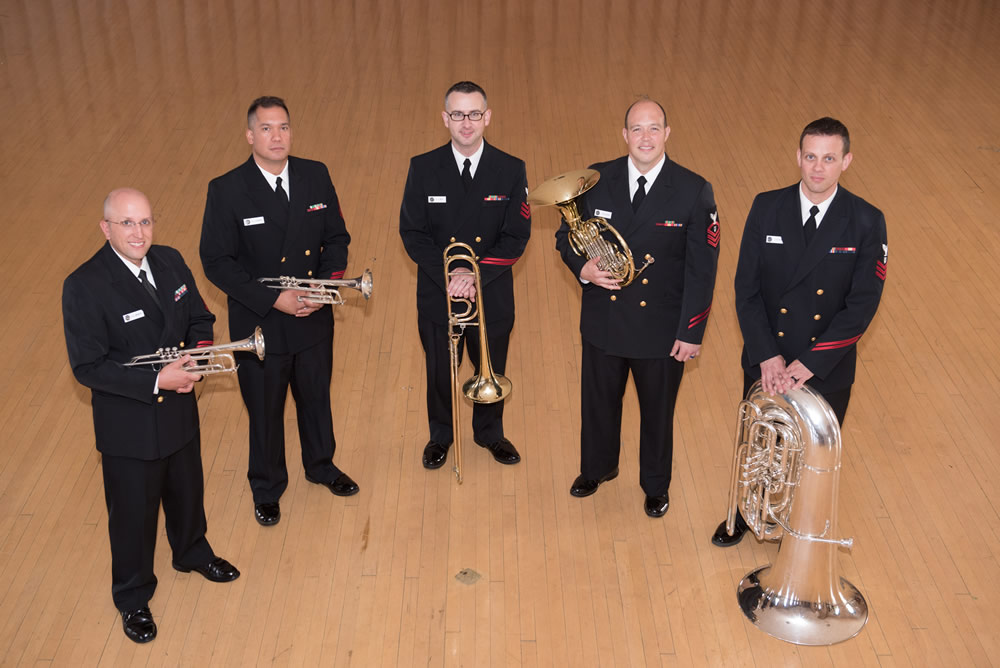 Since 1971, the Navy Band Brass Quintet has performed at ceremonies and events throughout the Washington area, including high visibility performances at the White House, Pentagon, State Department and Washington Navy Yard. Notable performances include inaugural events for President George W. Bush and Vice President Richard Cheney in 2000 and 2004, the dedication of the Flight 93 Memorial in Shanksville, Pennsylvania, and remembrance services at the National 9/11 Pentagon Memorial. Additionally, the group has been featured on NBC's Meet the Press and the Today Show. Committed to educational outreach, the quintet is an active participant in the Navy Band's Music in the Schools program, and has presented masterclasses and clinics nationwide at high schools, universities and international music conferences.

The quintet's repertoire includes over 400 works spanning six centuries, with many compositions arranged by its members. The group is comprised of Chief Musicians Carl Lindquist and Brandon Almagro on trumpet, Chief Musician Jason Ayoub on horn, Chief Musician Colin Wise on trombone, and Chief Musician James Hicks on tuba. Brass Quintet members are often featured soloists and principal players with the Concert Band.

Andy Spang received his Master of Music degree from the Eastman School of Music and a Bachelor of Music degree from The Boston Conservatory.  He also holds a Masters of Science in Music Education from Western Maryland College.  In addition to his role as tuba player and arranger with the Lyric Brass Quintet, Andy is the Director of Bands at  Folly Quarter Middle School and the Director of Music at Emmanuel United Methodist Church.  He lives in Westminster, Maryland, with his wife, Laura Baker, son Benjamin, and daughter Sophie.

In addition to his successful private studio, Andy has been on the faculty at Western Maryland College in Westminster, Maryland, and taught in the Extension Division of the Eastman School of Music and The Boston Conservatory.  He has been recognized multiple times as a Who’s Who Among America’s Teachers and a Who’s Who in America.  Andrew Spang was selected as the Maryland Music Educators Association’s “Outstanding Teacher of the Year” for 2007-2008.

Mr. Spang has toured and/or recorded with the Lyric Brass Quintet, the Soulful Symphony, Baltimore Symphony Orchestra, Handel Choir of Baltimore, Howard County Concert Orchestra, Eastman Wind Ensemble and the Eastman Trombone Choir.  An active recitalist, he has appeared as a soloist in six states and has been an Official Stu's Music Shop Clinician and Performing Artist.

Participants who pre-register will be sent music for the participant ensembles via email.