The pedestrian circle area between the William C. Jason Library and the Mishoe Science Center is slated to be converted into a place of education and celebration in honor of the legendary Tuskegee Airman.

For images from the event, click on the below link.

Mr. Thomas – a 95-year-old native of Bridgeville and a 1950 graduate of Delaware State College – attended the ceremony where he was honored for his service in that historic group of military men. He is officially listed in the Documented Original Tuskegee Airmen roster, which also included all air and ground personnel who worked in support of the historic pilots. 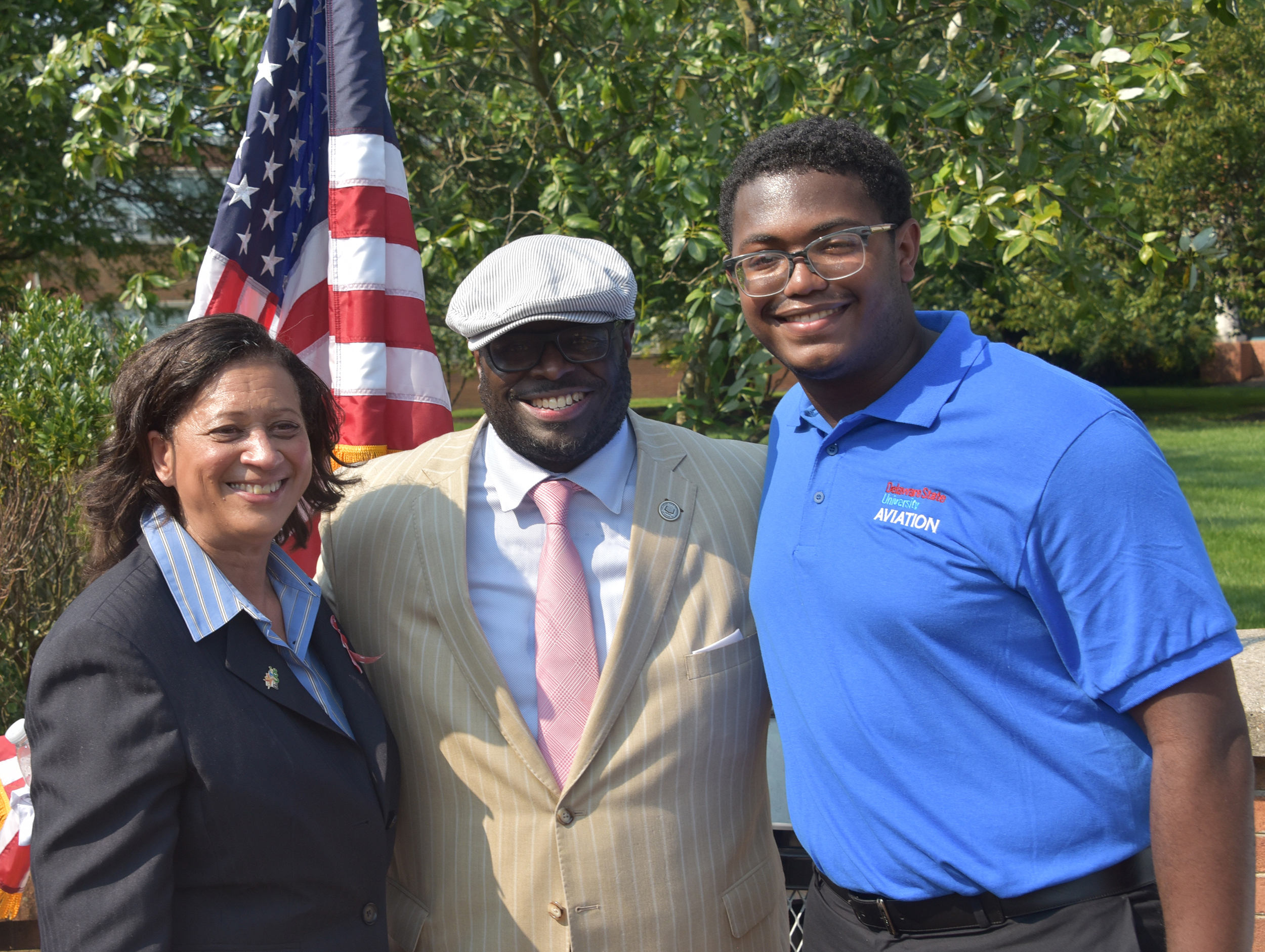 Mr. Thomas worked in the Tuskegee operations at Moton Field, one of five military training sites in the area of Tuskegee, Ala. His duties ranged from doing aircraft maintenance to providing pilots with weather and flight pattern information.

During the ceremony, Preston M. Stanberry, a freshman Aviation student from Atlanta, Ga., was awarded a $1,000 scholarship by the Legacy Bridges STEM Academy, Inc., presented in the name of Mr. Thomas.

Prior to the ceremony, the most widely publicized connection of the Tuskegee Airmen to Delaware State University was the 1939-1940 Civilian Flight Training School, a precursor of the University’s current Aviation Program. However, Dr. Donald A. Blakey, event organizer and emcee, told a little-known story of how the Tuskegee Airman connection resulted in the establishment of the then-DSC Airway Science Program in 1987.

Dr. Blakey told the story of how first attempts by Dr. Daniel Coons, founder of the University’s Aviation Program in the 1980s, to establish the flight training at Del State were unsuccessful initially. However, not giving up Dr. Coons did an exhibition on the Tuskegee Airman that involved bringing some members of that organization to the event to share their experiences.

In attendance was the then-president of the University’s Board of Trustees, Dr. William Dix who was so moved by the testimonies of the Tuskegee Airmen at that event, he told a story that he had not even shared with his wife. 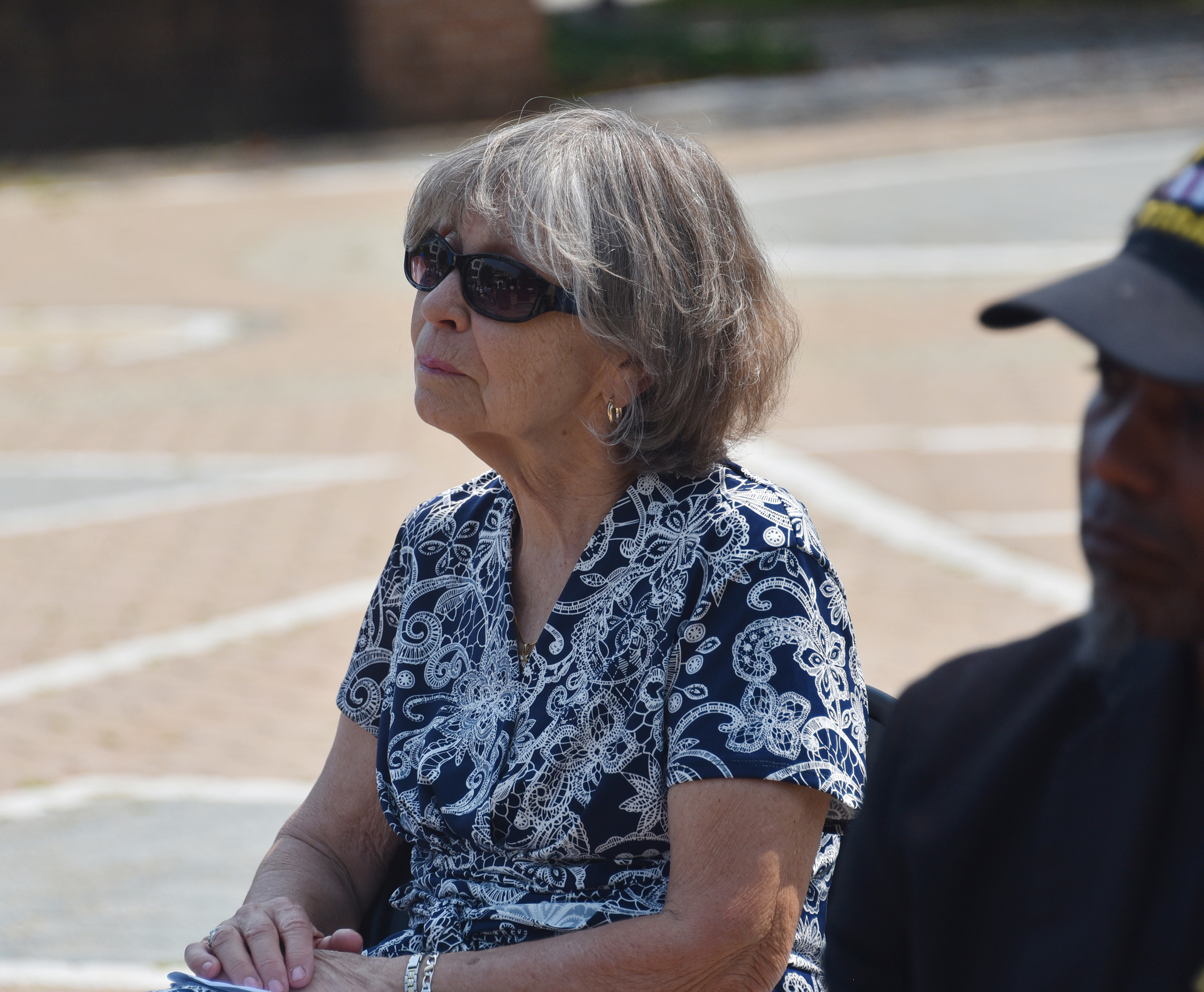 Dr. Dix – an African American (and the first-ever Black president of the Del State Board) – was a member of an artillery unit in World War II that was pinned down Nazi gunfire. His radio call for help resulted in a flying unit of the Tuskegee Airmen arriving to provide the critical air support that enabled the artillery unit overcome that dangerous wartime situation. Emotionally recalling that rescue at that event, Dr. Dix committed his efforts at Board president to make an Airways Science program a reality at Delaware State University.

“That meeting in the library right behind you with the gaggle of Tuskegee Airmen set the course for where we are today with our Aviation Program,” Dr. Blakey said.

Dr. Blakey’s account is confirmed in Dr. Coons’ 2014 book On the Wings of Hornets.

University President Tony Allen spoke at the event of the importance of history and remembering individual like Nathan Thomas.

“We need to do a better job of telling our story. Nathan Thomas is our story,” Dr. Allen said. “We need to be shouting from the rooftops that we have living history among us.”

He added that the ceremony marks our beginning of our continuing to honor DSU and its connection with the Tuskegee Airmen.

Dr. Blakey said the campus grounds dedicated on Sept. 12 would be as a place of education, respect and remembrance of the sacrifices it took us to get here. “The past, the present, the future, and as Dr. Allen would say, it all matters,” he said.