When it comes to leadership, Kyla C. Bonelli said she has learned it is about serving others. 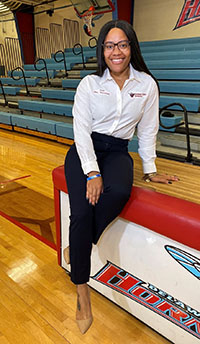 “It has taught me to be selfless, to put the needs of others first instead of trying to elevate myself,” said Ms Bonelli, who has completed a BA in English.

Ms. Bonelli is the recipient of 2020 Virtual May Commencement’s Presidential Leadership Award. Her 3.74 GPA-level academic performance is all the more impressive when noting her extracurricular activities.

Ms. Bonelli said that mentoring is her passion. In addition to mentoring new SGA members, she is active in the community at Fred Fifer Middle School and for Be BOLD (Beautiful, Outstanding, Lavish and Determined) Incorporated, where she works with girls from age 8-18.

“I just want to be the person I needed when I was young,” said Ms. Bonelli, who is also a Bible School teacher and tutor at First Pilgrim Baptist Church in Camden. “To help them stay on the path and live out the purpose of their life.”

Although disappointed that she will not walk across a Commencement stage, she is settling for the Virtual Commencement and then setting her sights on her next chapter. She has been hired to teach at Williams High School, a public charter school in Dallas, Texas. Ms. Bonelli said that she also plans to earn her doctorate and then enroll in law school.

A local graduate of Dover High School and a resident of the state capital, she is the daughter of LeRoi and LaChelle Bonelli.