In 2016, a new scholarship program made it possible for a group of undocumented students – known as Dreamers – to enroll at Delaware State University to begin an academic journey that only a few months prior seemed to be an impossibility.

During a fall 2019 media interview, Diego Perez Morales, who arrived with the first group in 2016, said that all that had happened to him and his fellow Dreamers is hard to believe.

“The feeling of graduation around the corner is surreal,” he said. “I am still in disbelief that in just one semester, the first Dreamer cohort will graduate with their bachelor’s degree.”

To see a photo slideshow of the Dreamers in their graduation caps and gowns and other pictures, click on the below link:

That “one semester” has just ended, and the first cohort of Dreamers and their families are celebrating their graduation with bachelor’s degrees – albeit far away from the Del State campus.

The Dreamers along with the rest of the student body left for spring break expecting to return to campus a week later to finish the spring semester. However, the COVID-19 pandemic forced the University to end in-person classes and finish the semester online. This was particularly hard on all seniors, who are finishing their year without experiencing their Commencement together at Alumni Stadium.

The Dreamers were a group that assimilated well into the University’s campus life, but also remained a close-knit group who relied on each other for support and encouragement.

“That is really the hard part of this, not being together as a group for Commencement,” said Indira Islas, a Dreamer from Gainesville, Ga., who has completed a BS in Biological Sciences. 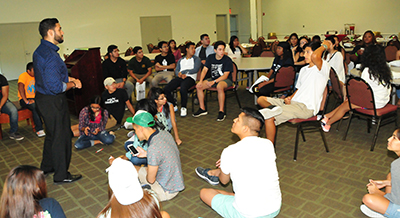 Eddi Cabrera Blanco of Washington, N.C., who has completed a BA in Mass Communications/Television Production, said it was the first time he had been around a large group of high academic-achieving Dreamers. “It was good to have some students to relate to,” he said. “We didn’t have that in high school.”

This group of Dreamers completed their undergraduate journey prolifically. The first cohort of Dreamers averaged a 3.5 GPA, setting a bar for the subsequent Dreamer cohorts that followed them. Their example apparently was an inspiration, as the subsequent cohorts have collectively achieved that same level of academic success.

Alondra Duenas, who has completed a BS in Management, said like most other Dreamers, she is the first in her family to earn a degree. She now has a job waiting on her in her home state.

“I have a job at Vanguard (an investment company) in Charlotte, North Carolina,” Ms. Duenas said. “I connected with them during the College of Business’ DEEP Day.”

It was the Opportunity Scholarship that opened the door of higher education for these Dreamers. The program was established by Donald Graham, the chairman of the Graham Holding Company and the former CEO and chairman of the Washington Post, who founded of TheDream.US as a way of helping undocumented students realize their higher education aspirations.

Mr. Graham found a willing partner in then-Gov. Jack Markell and Delaware State University – only one of two universities to initially enroll the Dreamers. Since the first cohort arrived in 2016, they have been followed every year by a new cohort of Dreamers. During the 2019-2020 school year, there were about 150 Dreamers enrolled at Del State through the Opportunity Scholarship.

Evelyn Gomez, who has completed a BA in New Media in Art, said Del State truly embraced the Dreamers. “We felt so welcomed, and it was a really good feeling to be appreciated, especially after coming from states that blocked us from a college education,” she said. “I didn’t feel like an outsider at Del State.”

Ms. Islas, whose aspiration is to be a medical doctor, said in addition the Dreamers benefiting from the support at Del State, the campus community also benefited from the Dreamers. “I think the campus has grown in terms of learning about our background and understanding our situation,” she said

Oliviadelphine Bekale, who earned a BS in Forensic Biology, said the undergraduate journey showed what is possible for Dreamers who work hard in school. “Right now I am studying to take the Medical College Admissions Test in the fall, and hopefully next year I will be in medical school somewhere,” she said.

Mr. Perez said others should note what the Dreamers are accomplishing at Delaware State University. “I believe that the Dreamers at DSU have demonstrated that they only need one chance in order for everyone to know how great they can be,” he said.

During the May 16 Virtual Commencement, University President Tony Allen presented Mr. Graham with an Honorary Doctor of Humane Letters. Mr. Graham then shared the below – partly telling the story of the Dreamers, and partly expressing his admiration of the graduating class of Dreamers:

“Four years ago, Delaware State University welcomed 34 somewhat different students. Yes, they were from low-income families; yes, they were people of color. But unlike most Hornets, they were not from Delaware. They were Dreamers, the children of undocumented immigrants. And they came from 15 states that that refused to give them in-state tuition (rates) to go to college.

“In high school, they had been excellent students. But for college, they received no federal aid, no loans, no state grants. It got worse. Their home states charged them out-of-state tuition or more. There was no place they could get an affordable college education until Delaware State University stepped forward. 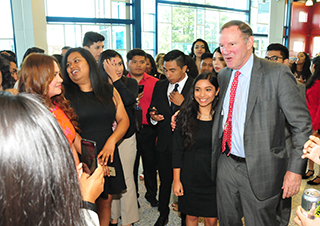 “God bless this University for that decision! God bless your last three presidents (Dr. Harry L. Williams, Dr. Wilma Mishoe and Dr. Tony Allen), your wonderful faculty, and the students who supported the Dreamers. TheDream.US stepped forward to help pay for their education.

“In September 2016, Gov. Jack Markell, Sen. Tom Carper and DSU President Harry Williams all welcomed the Dreamers. As I was riding back to Washington, D.C. with a Dreamer, he told me, ‘That is the first time they have been welcomed anywhere.’

“Of the 34 Dreamer students that came here four years ago, a few transferred, and all are on track to graduate today. Of those who remained at DSU (from the first group), 100% will graduate from DSU today.

“We at TheDream.US believed in you, and we were right. We will never understand what each of you went through to get to graduation today. You stayed focused, while parents’ lives were threatened with deportation, while your families’ economic lives were turned upside down.

“When you were told that you can’t go to college, you just worked harder. You spent hours searching for any college opportunities until you found one in Dover, Del.

“I admire you more than I can say. I admire you parents, your grandparents, brother and sisters who are watching you today with tears in their eyes.

“As to your future, I believe in you even more. Huge obstacles await you; that is nothing new. You will succeed because of your education, because your motivation is impossible. Most of all you will succeed because you are good men and women, loving and kind to each other and to all. Your values, hard work, decency, faith and family are the values of the best of the people who for 231 years have called themselves American citizens. And that is what each of you will one day be.”