State Sen. Elizabeth Lockman wrote the below guest opinion editorial which endorses Dr. Tony Allen as the President of Delaware State University. The editorial has been published on the Delawareonline.com website of the News Journal, and is slated to run in the print version this weekend.

Somebody asked me that question the other day, and I realized that Tony had already impacted my life long before I ever encountered him personally.

When I did, the reason that meeting didn’t register in my mind is because I already thought of him as my friend, mentor and advocate. If I were to stand in an auditorium of others who could say the same, it would be standing room only.

I’m an alumna of Public Allies Delaware, the innovative program that connects talented young people between education, public service and potential employers, whether in the public, non-profit or private sectors. 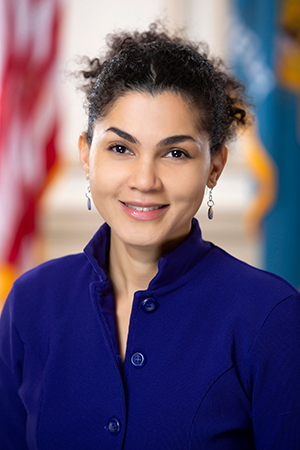 Over the years, more than 1,000 young Delawareans — including me — have gotten their start in careers oriented toward the value of giving back through tens of thousands of hours of community service. Tony was one of the organizers of Public Allies, touching my life before I knew exactly who he was.

Likewise, I was once a Metropolitan Urban League Young Professional. Tony’s one of the founders of the Urban League in Delaware, and has received their highest national honor for public service — the Whitney M. Young Award for Advancing Racial Equality. There he was — mentoring me again before we ever became colleagues and friends.

By the time I became the parent co-chair on the Wilmington Education Improvement Commission, I can say for sure we’d known each other for a while since he was my chair.

That was my first opportunity to witness up close Tony’s knack for creating and facilitating entities with great reach across all social, political and economic levels. He taps into our existing narratives about the way things are, and then provides us with a platform for unpacking and transforming them into something far grander than we’d ever imagined.

Tony has that rare ability to focus his entire attention on the person with whom he’s speaking, to make them feel like the center of the universe whether the conversation lasts 30 seconds or an hour.

I’m a big fan of the concept of truth and reconciliation. South Africa brought a severely wounded nation back from the brink of dissolution at the end of the Apartheid era with a shared national commitment to honesty, forgiveness and reparation. That’s something like what Tony does, in a way that seems wholly natural and without pretense.

He helps us recognize truths about ourselves and our society. He then elevates them and creates a space for us to begin the process of reconciling those truths into something better.

Tony builds big, sprawling coalitions that have the vision to tackle serious issues and the energy to keep pressing forward. He identifies leaders, gives them a berth to hone their ideas, nurtures their talents, and then ensures the connections are made to support their efforts.

So many times at WEIC I remember seeing that big, confident grin as he handed me what seemed to be an impossible assignment.

“I’ll need you to run the commission meeting tonight, Tizzy. I’ve got a scheduling conflict. You can handle it.”

Because he told me I could, with a conviction so honest and empowering that it left no room for either equivocation or failure, I did it. Without having Tony Allen in my life even before I’d even met him, I’m not sure where I would have found the audacity to run for State Senate.

Now Tony is clearly where he was meant to be as president of Delaware State University. Those of us who have watched his last two and one-half years as provost have already seen his impact.

It doesn’t surprise us that the University is now supporting a Center for Neighborhood Revitalization Research to tackle some of Wilmington’s toughest problems; is actively studying health disparities and trauma-informed treatment; and has begun dramatically expanding its footprint in both Sussex and New Castle Counties.

It doesn’t surprise me that Tony has already developed a partnership with Apple to provide every incoming freshman at Delaware State University with an iPad or MacBook, or that he’s led the charge to replace the University’s aircraft fleet.

These are just the kinds of things he does.

When Tony envisions Delaware State University as “the most diverse, contemporary HBCU in America,” I don’t have doubts about either his commitment or his capacity.

My response is more along the lines of “How can I be a part of that?”

This guest opinion editorial is reprinted by permission from the News Journal.