Delaware State University truly represented itself Sept. 18-21 in events that reflected the excellence of its Aviation program, the importance the institution places on its spiritual health, its place among HBCU, and culminating with its annual Homecoming activities.

On Sept. 18, legislators, alumni, aviation community members and other friends and supporters joined University officials at the Delaware Airpark to celebrate and christen the first of a new fleet of 11 aircrafts for its Aviation Program. 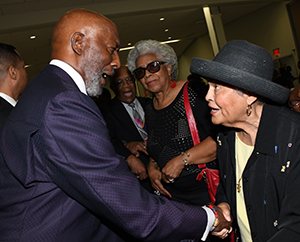 The new fleet – which is a significant upgrade of the aging planes the program has used for many years – is the result of a $3.4 million grant from the General Assembly’s Delaware Higher Education Economic Development Fund that is designed to significantly expand the University’s Aviation Program. The funding has enabled the University to purchase 10 Vulcanair V1.0 single-engine aircraft from Ameravia Inc., and also a twin-engine Piper.

The Sept. 20 President’s Prayer Breakfast filled the MLK Student Center Parlor with more than 300 faith-based community members in attendance from all over Delaware. The events featured retired AME Bishop John R. Bryant, who preached a rousing keynote message. The Rev. Erika Crawford, pastor of Mt. Zion AME Church of Dover, was this year’s recipient of the Community Faith Partner Award for her ministry work in the Capital and Caesar Rodney School District.

When sports enthusiasts across the nation tuned in Sept. 20 to ESPN’s Stephen Smith Show, they were treated to performances by the Approaching Storm Band, the Hornet Cheerleaders, and an audience that included more than 400 Delaware State University students and alumni. The live broadcast from the 76ers Fieldhouse in Wilmington was part of that city’s HBCU Week activities. 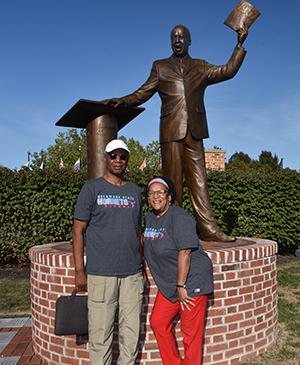 One of the most impressive outcome of the University’s involvement in Wilmington’s HBCU Week, admissions staff took in over 400 enrollment applications and accepted 252 students as Hornet students. In the process, the University also awarded approximately $2 million in scholarships – which included 20 full-ride Presidential Scholarships.

Hugs and high-fives were in over abundance, as thousands of alumni came back to their alma mater this weekend during the annual Homecoming week. Beginning with the Sept. 15 Coronation of Mr. and Miss DSU Marcus Dunn and Tahjah Warner, the week also included a Sept. 19-20 Alumni Art Exhibition in the Jason Library Arts Center/Gallery, the traditional Homecoming Parade and Game on Sept. 21, and later that evening a Masquerade Ball.

Among the countless alumni on campus during the Homecomng Weekend, John Taylor, former Hornet star wide receiver (1982-85) and later a NFL Pro-Bowl player who played in three Super Bowls, returned to the University. He was presented the Dr. Jerome Holland Legacy Award, and he in turn presented members of the University’s Board of Trustees with autographed bobble head likenesses of himself.

The Homecoming Weekend also reflected the generosity of alumni and supporters, as the University celebrated the donation of nine checks totaling $112,760, all going toward scholarship endowments.

Early Board of Trustees

Board of Trustees Recognize University Employees