Dr. Matthew Bobrowsky, an adjunct instructor for the University’s Delaware Institute for Science and Technology, recently applied his teaching skills on the other side of the world. 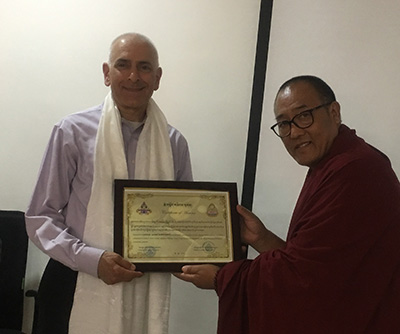 Dr. Bobrowsky was among 30 instructors selected from around the world by the Emory Tibet Science Initiative to teach science to Tibetan monks in Southwest India. During the two-week program, he taught 12 classes on astronomy through an interpreter who translated English to Tibetan.

While Tibetan monks have been known throughout their 14-century existence for their Buddhist religious pursuits and spiritual development, in recent years they have taken a great interest in the sciences.

“They now have a Dalai Lama (the 14th) who understands science is important and wants the monks to learn about modern science and integrate it with their understanding of the world,” Dr. Bobrowsky said.

In accepting the invitation to teach, Dr. Bobrowsky did so without concern for financial gain. While the program covered the cost of his transportation, lodging and meals, he and the other instructors donated their time to teach the science subjects.