U.S. Sen. Tom Carper visited Delaware State University on April 19 to learn more about the Alzheimer’s research that is taking place in the Mishoe Science Center. 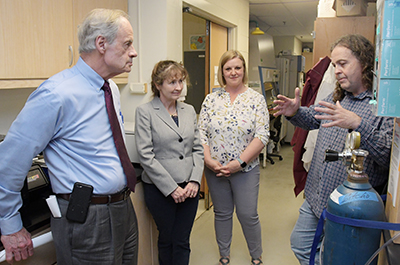 Sen. Carper visited the science laboratory of Dr. Michael Gitcho, associate professor of biological sciences. There, along with Dr. Melissa Harrington, University associate vice president for research and Katie Macklin, director of the Delaware Valley Chapter of the Alzheimer’s Association, the state’s seniormost U.S. senator heard Dr. Gitcho’s perspective on the current research on the disease.

Sen. Carper shared how when he first entered politics as Delaware’s State Treasurer in the late 1970s, Medicaid was a relatively small program that mainly helped low-income women and children. He noted that today about 67% of Medicaid funding is spent caring for people with Alzheimer’s disease, and added that caring for people with Alzheimer’s disease will cost the country about $290 billion in 2019.

Dr. Gitcho said the most promising approach offered by research could lead to the early diagnoses of the misregulated pathways of cell metabolism before brain cells are lost and then identify drugs or other treatments that can correct or compensate for the damage or misregulation.  He said that research on how brain cells are damaged is critically important in developing ways to prevent or effectively treat Alzheimer’s. 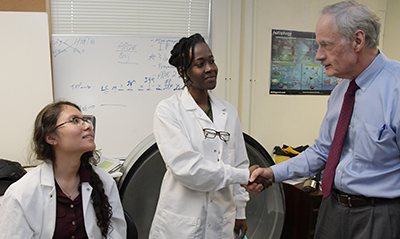 Dr. Gitcho also shared some things that people can do to keep their brain healthy, such as “eating healthy and getting plenty of exercise, just like our mothers always said we should. Sleep is also very important.”

He added that better quality sleep and more of it is associated with slower onset of Alzheimer’s symptoms. Dr. Gitcho also stressed that as people get older, it is important to for them to continue to challenge their brains – like learning new skills and going out to new places, as well as socializing with people.