Delaware State University officials, state legislators, alumni, members of the aviation community and other friends and supporters gathered Sept. 18 to celebrate the first of a new fleet of airplanes acquired for the University’s Aviation Program.

The celebratory program took place at the Delaware Air Park in Cheswold, where there was abundant rejoicing over the new plane acquisitions and the success of the Aviation Program. 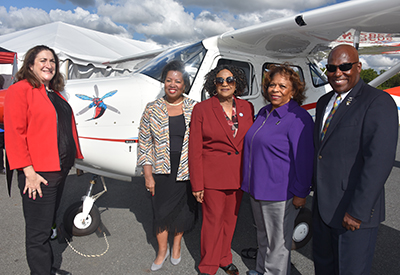 The new fleet is the result of a $3.4 million grant from the General Assembly’s Delaware Higher Education Economic Development Fund that is designed to significantly expand the University’s Aviation Program.

The funding is enabling the University to purchase 10 Vulcanair V1.0 single-engine aircraft from Ameravia Inc., and also a twin-engine Piper.

University President Wilma Mishoe said that the grant provided critical help to the Aviation Program and its aging fleet of planes.

“Our planes would have been out of compliance by 2020,” Dr. Mishoe said. “The General Assembly stepped up and funded an entire fleet for us, and I want to thank them.”

State Rep. Debra Heffernan noted that the event’s theme – “Watch Us Soar” – was fitting for the University’s Aviation Program. She said it is a smart investment for the State of Delaware. 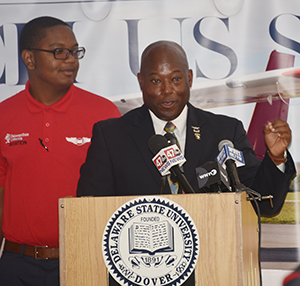 “This is truly a win-win for Kent County and the state as a whole,” said Rep. Heffernan, who also is the co-chair of the General Assembly’s Bond Bill Committee, which approved the grant to Delaware State University.

“The Board of Trustees recognizes the Aviation Program as one of the programs that makes Delaware State University unique and serves our mission to make our mark on the world,” Dr. Williams said.

The Aviation Program boasts 100% career placement of graduating professional pilots. Given the success of its program with an aging fleet, the new one is expected to move the program to even higher levels of excellence.

“The new fleet and its systems and avionics puts us light years ahead of what we have been flying,” said Lt. Col. (ret.) Michael Hales, Aviation Program director.

He added that the new fleet will enable the Aviation Program to accept more students. 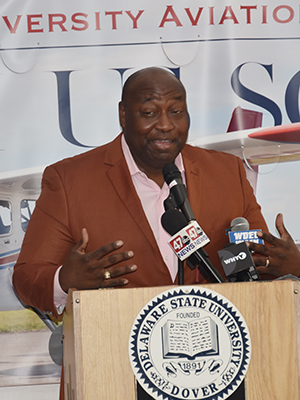 “We have had students coming out of the woodwork from all over the place (to enroll),” Lt. Col. Hales said.  “They are seeing the success students are having in this program.”