African-Americans in the United States, as well as all other slave descendants worldwide – also known as the African Diaspora – are considered to be the “6th Region” of Africa.

However, many such people are unaware that they have that distinction.

Delaware State University is now putting itself in a position to re-educate slave descendants on not only their African past but also to renew and strengthen their present connection to the continent of their ethnic origin.

As part of Pan African Development Conference held at DSU April 10-12, the University announced that it is establishing a Center for Global Africa.

To view images from the Pan African Development Conference, click on the below links for the photo slide shows of the receptions and the conference panel discussions:

Ezrah Aharone, an adjunct professor of political science and the driving force behind the Center for Global Africa, said its establishment ushers in a new era in which the University and other HBCUs can play a bigger role in Africa. 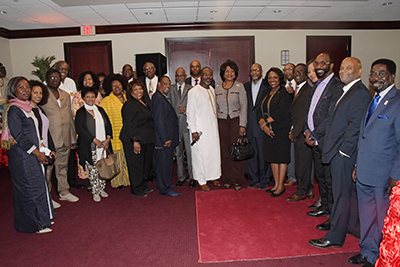 “The Center for Global Africa at DSU is designed to be a centralized location and agency to coordinate the diaspora involvement in the affairs of Africa,” Mr. Aharone said. “It is a coordinating institution that will involve other HBCUs, as well as corporation sponsors who will be directly involved in the economic facilitation in what we do.”

He said the University’s Center for Global Africa would be a major conduit that connects the intellectual capital of HBCUs to Africa, where it will collaborate with the intellectual assets on that continent.

Serving with Mr. Aharone in the initial work of the Center for Global Africa are Dr. Akwasi Osei, associate dean of the College of Humanities, Education and Social Sciences; Dr. Marikis Alvarez, associate dean for research in the College of Agriculture, Sciences and Technology; as well as  Dr. Michael Casson Jr., dean of the College of Business. Others include Wade Robinson, visiting professor of economics; Leandra Marshall, Global Studies adjunct instructor; Dr. Donna Patterson, chair of the Department of Political Science, History and Philosophy and Dr. Makda Maru, visiting assistant professor in political science.

The Pan African Development Conference joined together the fledgling center with distinguished representatives of the African Peer Review Mechanism (APRM), which is a specialized agency of the 55-nation African Union. Established in 2003, the APRM is a self-monitoring body that promotes good governance among African nations. With the goals of fostering political stability, high economic growth, sustainable development and accelerated regional integration, the APRM reinforces good governmental practices, identifies deficiencies and assesses the capacity building needs of member African Union nations.

The APRM, therefore, represents the vital link to Africa for Delaware State University and other HBCUs.

“We will go to a country and look at their assets and all that they have to offer, and then we will help them impact strategic outcomes,” she said.

Dr. Casson, dean of the University’s College of Business, said he sees a big role for his faculty and students in the Center for Global Africa’s efforts.

“In the College of Business, we believe we are students of problems, not of disciplines, and that philosophy fits uniquely into the goals and objectives of the Center for Global Africa,” Dr. Casson said. “We want to think about how we best leverage our resources and talent – our talent being our faculty, student and staff, our finance and accounting business acumen – to support some of the opportunities and address the needs that exist in Africa.”

Dr. Osei said it is another example of global outreach and service at Delaware State University.

“The idea of the descendants of Africa helping their kith and kin on the continent is not new; it has a long history,” he said. “The Center for Global Africa’s activities, therefore, represent a 21st Century contribution to this noble cause.” 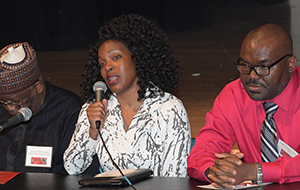 In addition to announcing the establishment of the Center for Global Africa, the Pan African Conference held several panel discussions on the role of HBCU students in the reshaping of Africa and the diaspora image, development opportunities for U.S. businesses, the role of the APRM and the mobilization of the 6th Region.